How many sides to that story?

Conflicts are a part of life, but they do not always have to end in a bad way. There are many aspects to a conflict that could lead to a bad result, one being a change in the story by either party.  Also, a time lapse after the conflict happens usually does not help and the ability to move on seems too often to be a challenge.

In the 1990’s I was a negotiator for the labor contract at Bell Atlantic (now, Verizon).  During the course of the long meetings that usually went late into the night, I made a comment that was not compassionate and sparked a conflict in the negotiations.

After a few more meetings, the union side continued to take exception from my comment and we moved further apart in making an agreement. Then, the union started to bring up other disagreements that had nothing to do with my comment.  This was a classic example of how not to settle a conflict.

Finally, after about a week, I called the union president on a Saturday morning and apologized for the comment I made.  I also asked him to set an example and settle our differences.

He did do that, as I reminded him that our conflict had affected the 200 employees of the office. We settled and moved forward with a successful contract for both sides. 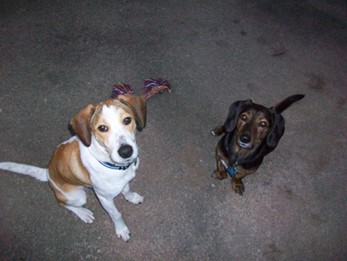 They lived together here in my home, and although they never quite saw eye to eye, they usually got along. One day there was a carrot on the kitchen floor. Both Spartacus and Daniel lunged for the carrot, but Spartacus prevailed.   There was some serious barking that ensued, but then it stopped.

Not more than 5 minutes later they were together at the front door terrorizing the mail person.

Daniel and Spartacus had shown me the 3-point plan for settling conflicts.

What is most impressive is that each time Daniel and Spartacus had a brief conflict, their relationship actually improved!  They turned each issue into a unique bonding technique that seemed to be very successful.  We can do the same.

Your gift helps Joe continue to bring new content, and most important to help animals in need around the world.